So how healthy are breakfast biscuits, let’s put them to the test….

You’ve seen the ads for them, and you’ve often wondered are they healthy, are they full of sugar, right? So I bought a box of a well-known brand and an opportunity arose when I was rushing around one morning and left myself no time for my usual organised breakfast!

Having grabbed a pack of four I found myself looking for food soon after, not to mention that slight guilty feeling I had at the thought of eating ‘biscuits’ for breakfast!  They tasted very sweet and actually taste like biscuits!

Only a short time later I was feeling rather peckish again.  Luckily I had brought a banana with me because my stomach was growling an hour later after the breakfast biscuits.  There goes the truth in their claim that they ‘keep you fuller for longer as the carbohydrates are released slowly over a four hour period’.

My usual breakfast would be a high fibre breakfast cereal like wheat flakes made on low fat milk and I might add some nuts, seeds and berries.

If you compare the wholegrain cereal to the four (50g) pack of breakfast biscuits they are 230kcal but if you need to eat additional food like fruit and still feel hungry then the calories could easily rack up! The fat and sugar content is quite shocking though, with 11g sugar per pack and 8g fat per pack, which is something to think about since this is about twice the amount of sugar and fat compared to a bowl of wholegrain cereal.  The sugar is ‘added / refined sugar’ so for me this doesn’t compare to natural fruit sugar from my berries which are also rich in antioxidants and fibre.   The fibre isn’t too bad at 3.3g per 50g pack of four biscuits but they didn’t fill me up the way my high fibre breakfast cereal does at 4.5g fibre per bowl. 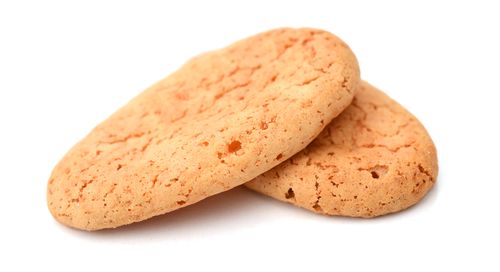 At the end of the day, the breakfast biscuits should be considered an occasional thing, not to go for them every day.  I’d prefer to stick with my wholegrain cereal and berries to keep me going that little bit longer.  I just needed to get out of bed a mere five minutes earlier and I would have had the time!!