Coconut Oil – What’s It All About?

Extra-virgin olive oil has been top of the list in popularity when it comes to cooking. These days coconut oil is stealing the spotlight. Health claims around this tropical oil are vast, but so is controversy. So what is it all about? Here are some facts about coconut oil.

WHERE DOES COCONUT OIL COME FROM?
There are two main types of coconut oil that you can use in cooking and baking: Virgin and refined.
“Virgin” coconut oil is extracted from the fruit of fresh mature coconuts without using high temperatures or chemicals; it’s considered unrefined.
“Refined” coconut oil is made from dried coconut meat that’s often chemically bleached and deodorized.
Some food manufacturers may use yet another form of coconut oil that’s further processed: partially hydrogenated coconut oil.

NUTRITIONAL PROPERTIES OF COCONUT OIL:
The coconut oil that you’ll find on supermarket shelves, whether virgin or refined, is high in saturated fat — more so than butter. In fact, it’s considered a solid fat. One tablespoon of coconut oil provides 117 calories, 13.6g total fat (11.8g saturated fat, 0.8g monounsaturated fat, 0.2g polyunsaturated fat), no protein or carbohydrates, and trace amounts of iron and vitamins E and K.
Coconut oil doesn’t contain cholesterol. Specifically, virgin coconut oil, has some antioxidant properties, potentially because of plant nutrients called phenolic compounds.
What about partially hydrogenated coconut oil? Be cautious of processed food products, such as commercial baked goods, that contain this type of the oil. The further processing of coconut oil transforms some of the unsaturated fats into trans fats.

IS COCONUT HEALTHY OR UNHEALTHY?
There’s a lot of health “hype” surrounding coconut oil, claiming the benefits of coconut oil for everything from weight loss to Alzheimer’s disease. The truth is, there isn’t yet enough scientific evidence to support all of the claims about coconut oil’s potential health benefits.

When it comes to fats, most of what you eat should be monounsaturated or polyunsaturated, like you find in nuts, seeds and avocados. Guidelines recommend limiting the amount of saturated fats in your diet and limiting trans fat intake. These guidelines have been established because saturated fats, in general, and trans fats are associated with increased total cholesterol and low density lipoprotein (LDL) “bad” cholesterol, as well as increased risk of coronary artery disease.

However, virgin coconut oil is high in lauric acid, which is a saturated fat that’s classified as a medium-chain fatty acid; it can raise both “bad” and “good” cholesterol levels. And there’s some preliminary evidence — including both animal and human studies — suggesting that coconut oil intake may be associated with a neutral, if not beneficial, effect on cholesterol levels.

THE BOTTOM LINE?
Skip food products that contain partially hydrogenated coconut oil. Choose virgin coconut oil and use it in moderation. Despite emerging research, the recommendation is still to limit your total saturated fat intake. Also just remember, that coconut oil is a fat at the end of the day and all fats in the wrong quantities, cause weight gain.

COOKING WITH COCONUT OIL:
Virgin (or unrefined) coconut oil has a very light, sweet-nutty coconut flavor and aroma. It’s ideal for baking or medium-heat sauteing. It’s a good culinary choice when preparing curries or other dishes that benefit from a slight tropical flavor. Refined coconut oil is basically tasteless.

Though high in saturated fat, virgin coconut oil doesn’t contain trans fat, making it a better choice than trans fat-containing shortening. And for vegans or strict vegetarians, coconut oil offers a plant-based replacement for butter that stands up well in baking or sauteing.
Like other oils, coconut oil should be stored well sealed and in a cool, dark place. It solidifies when too cool, but quickly liquefies when warmed up. 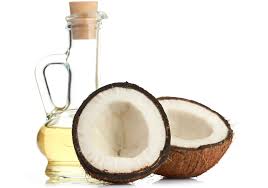